The role of the Historic Preservation Commission is to protect, educate and promote historically significant buildings, structures, sites, monuments, streetscapes and neighborhoods, which represent distinctive elements of the City's historical, architectural and cultural heritage.

The Commission meets on the 2nd Wednesday of each month at 7:00 PM in the Common Council Chamber at City Hall.

The following White Plains properties have been designated local landmarks: 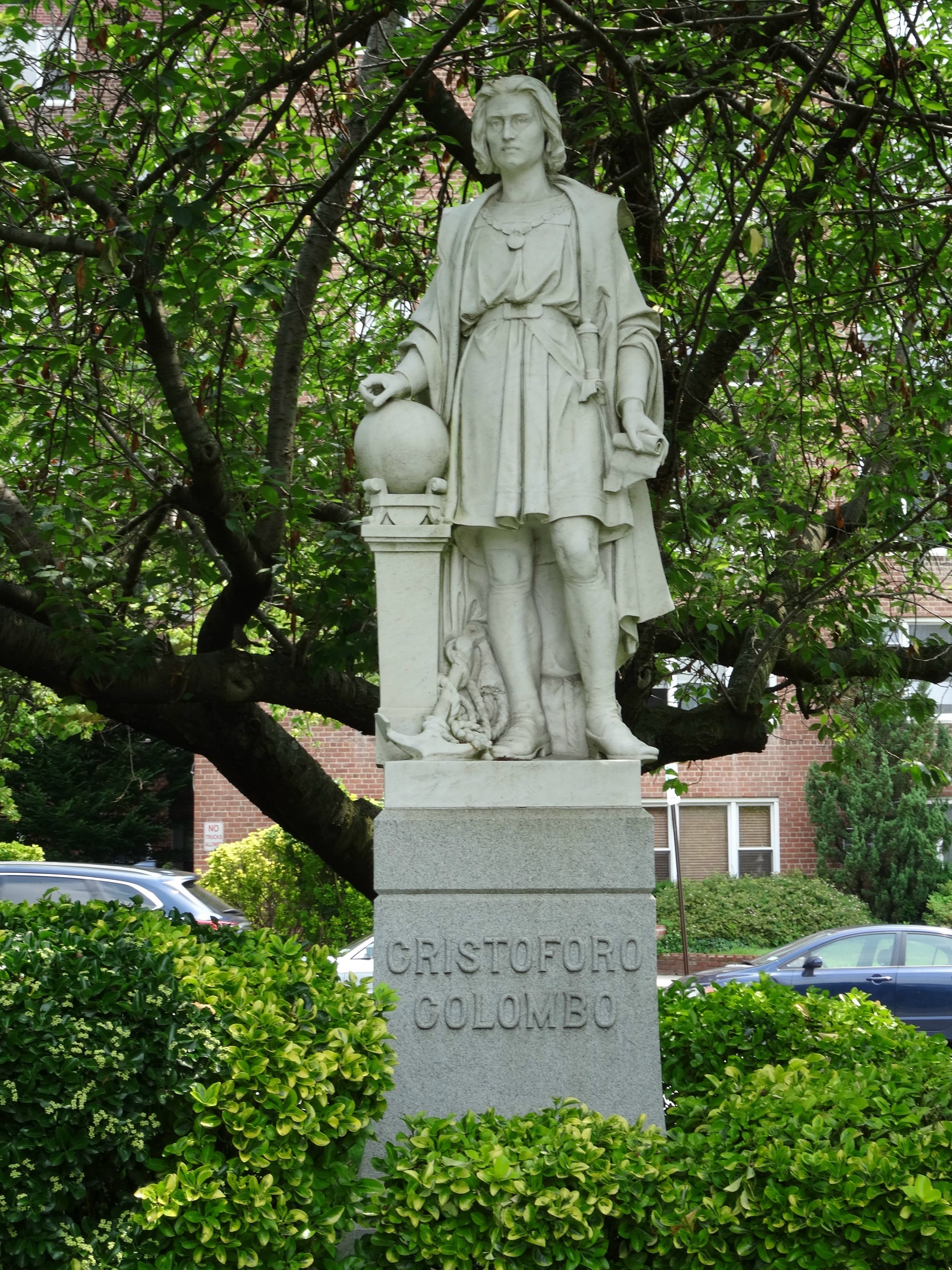 A stone statue and base depicting the Genoese explorer/navigator Christopher Columbus (Cristoforo Colombo) c. 1451 - 1506. The 10 ton marble monument was carved in Carrera, Italy under the direction of sculptor Peter Celi of The Bronx. It was presented to the Village of White Plains by the Stella d’Italia Society and dedicated on October 12, 1915 at its original location in Tibbets Park. In 1954, it was moved 85 feet north to its present site in order to enable the current traffic pattern at North Broadway and Lake Street. A commemoration is held at the site annually on Columbus Day by the Antonio Meucci Lodge #213 Order of the Sons of Italy in America.

Next to a stream that drains into the East Branch of the Mamaroneck River, this small family burial ground was founded in the early 19th Century by Israel Harriot (1748-1836), a New Jersey native and veteran of the Revolutionary War. Reference to the burying ground is first made via reservation clause in an 1822 deed of 16 acres along West Street from Harriot to William Lawrence. There are at least seven burials on the site, however most of the stones are rough fieldstone or have since disappeared. 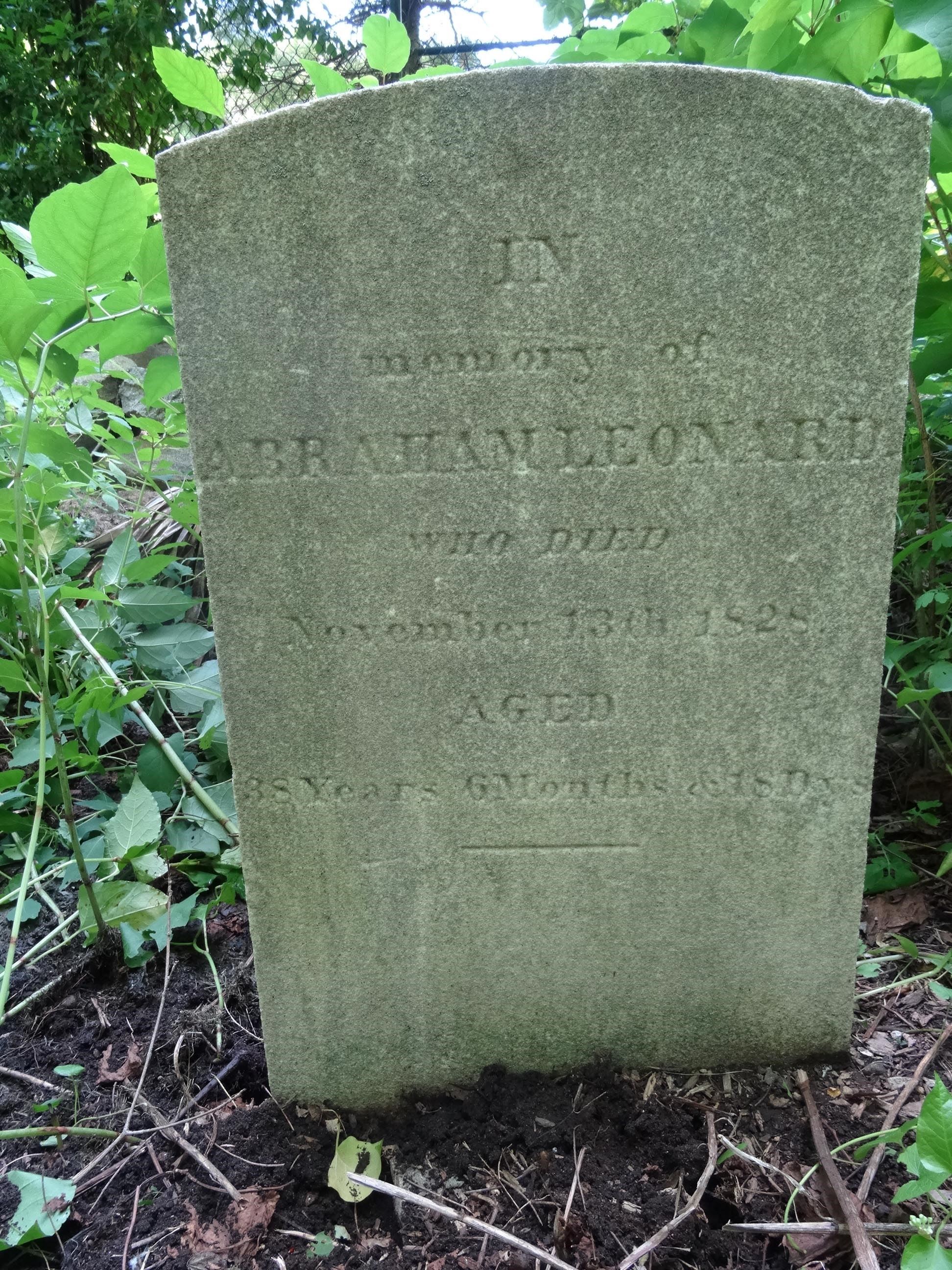 The one remaining legible stone is that of Abraham Leonard (1729-1828) whose wife Catherine (1790-1850) was the daughter of Israel Harriot and his second wife Charity Haviland (1751-1815). The burying ground is bordered by an original fieldstone fence, and in 2009, Troop 73 BSA installed a post and rail fence along the West Street side of the property.

For over 100 years, the family of Jonathan Purdy, Esq. (1694-1772) buried their loved ones in a family cemetery located in the heart of their vast land holdings on the south end of White Plains. Jonathan Purdy’s father, Judge Joseph Purdy (1653-1709), was an original patentee of White Plains in 1720. 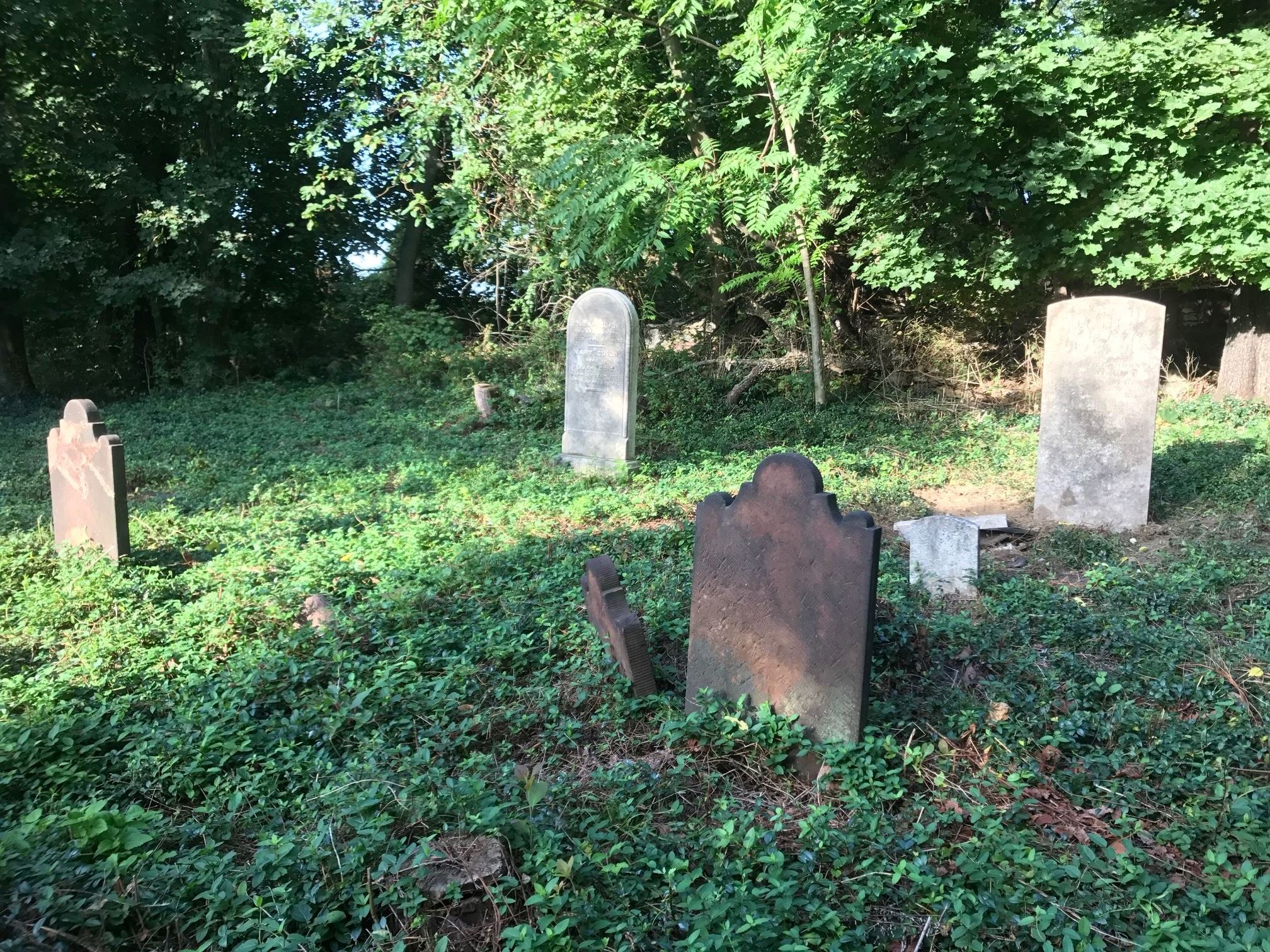 The first burial on the site in 1760 was that of Jonathan’s 8-year-old grandson Christopher Purdy. A reservation clause dating to 1828 was recorded in 1834, setting aside “Forty square rods” (¼ acre) for a burying ground for the “issue, descendants and family connections of Jonathan Purdy, Esquire”, as well as a right of free passage in perpetuity for visitation and upkeep. Over the years, a total of 60 burials took place, ending with that of Maria Purdy in 1864. Several of those buried were signers of the Protest of Inhabitants and Freeholders of Westchester County, New York on April 13, 1775. Also among the buried are Elijah Guion (1791-1853), former White Plains Postmaster, Town Clerk and Justice of the Peace, and his wife Mary Purdy (1793-1850); and Revolutionary War veteran Hercules Wessels (1757-1833) and his wife Elizabeth Wool (1754-1838). The headstones, mostly Portland sandstone or marble, are finely crafted but have suffered from years of weathering, neglect and vandalism. Since 2007, the White Plains Historical Society has been working with Purdy descendants, a stone craftsman, and volunteers to repair and replace several of the markers. 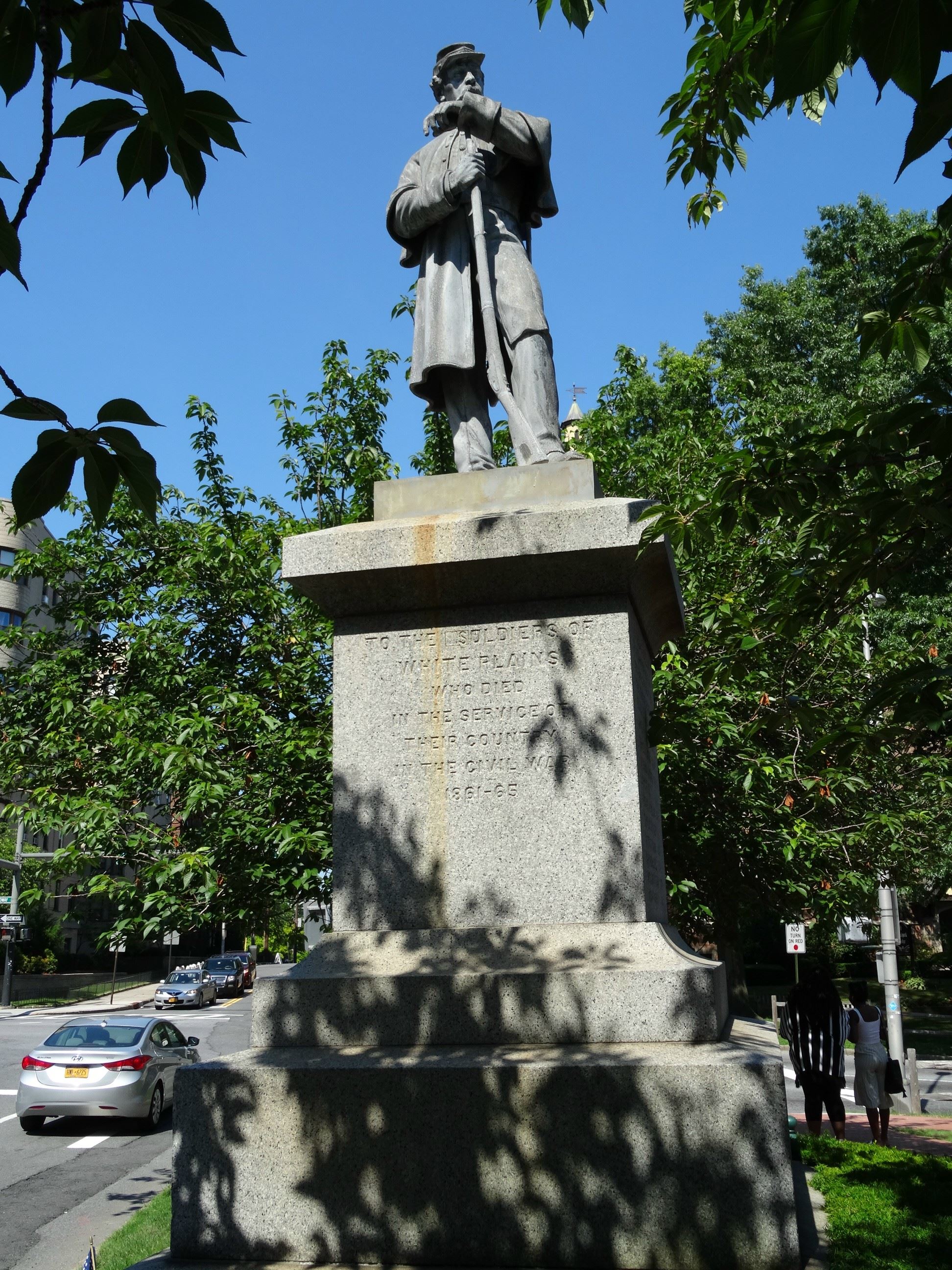 A classical metal sculpture of a Union soldier designed by Henry J. Ellicott and cast in zinc (“white bronze”) by Moritz J. Seelig & Co., Brooklyn, NY. The figure sits atop a granite pediment bearing the names of 26 White Plains soldiers and sailors who died in the service of the Union, and is inscribed “To The Soldiers Of White Plains Who Died In The Service Of Their Country In The Civil War 1861-1865.” Many of these servicemen died in camp of illness, but among the combat fatalities were 2nd Lieut. George F. Rysdyk, killed at Seven Pines, VA; as well as 1st Lieut. Horton R. Platt, Sgt. Andrew Bogart, and Pvts. Michael Donovan and Simeon See, all killed or mortally wounded in the last action at Spotsylvania Court House. The memorial was purchased for $1,600 by the veterans of the Cromwell Grand Army Post No. 466 (led by Valentine M. Hodgson) with funds raised from the residents of White Plains. It was dedicated in public on July 4, 1872 at a ceremony which included Gen. Alexander Hamilton of Irvington, NY, grandson of the Revolutionary War hero and first Secretary of the Treasury. 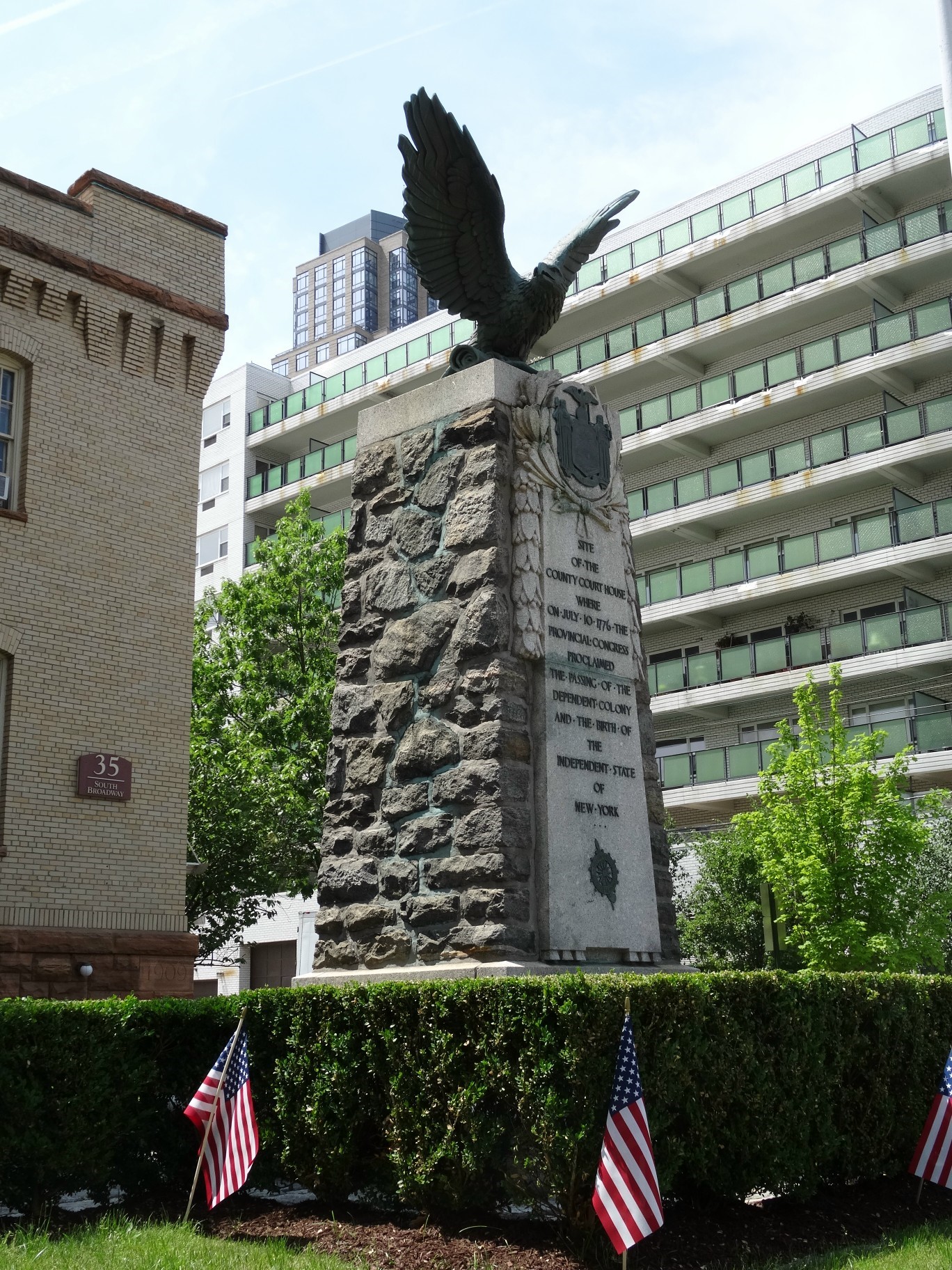 A bronze eagle atop a neo-classical stone and mortar obelisk commemorating the site of the original county courthouse where on July 9-10, 1776, the New York Provincial Congress accepted the Declaration of Independence and declared New York an independent state.  Stones from the original courthouse foundation are incorporated in the obelisk and base. Erected in 1910 by the White Plains Chapter of the Daughters of the American Revolution.  Designed by Bruno Louis Zimm (1876-1943). 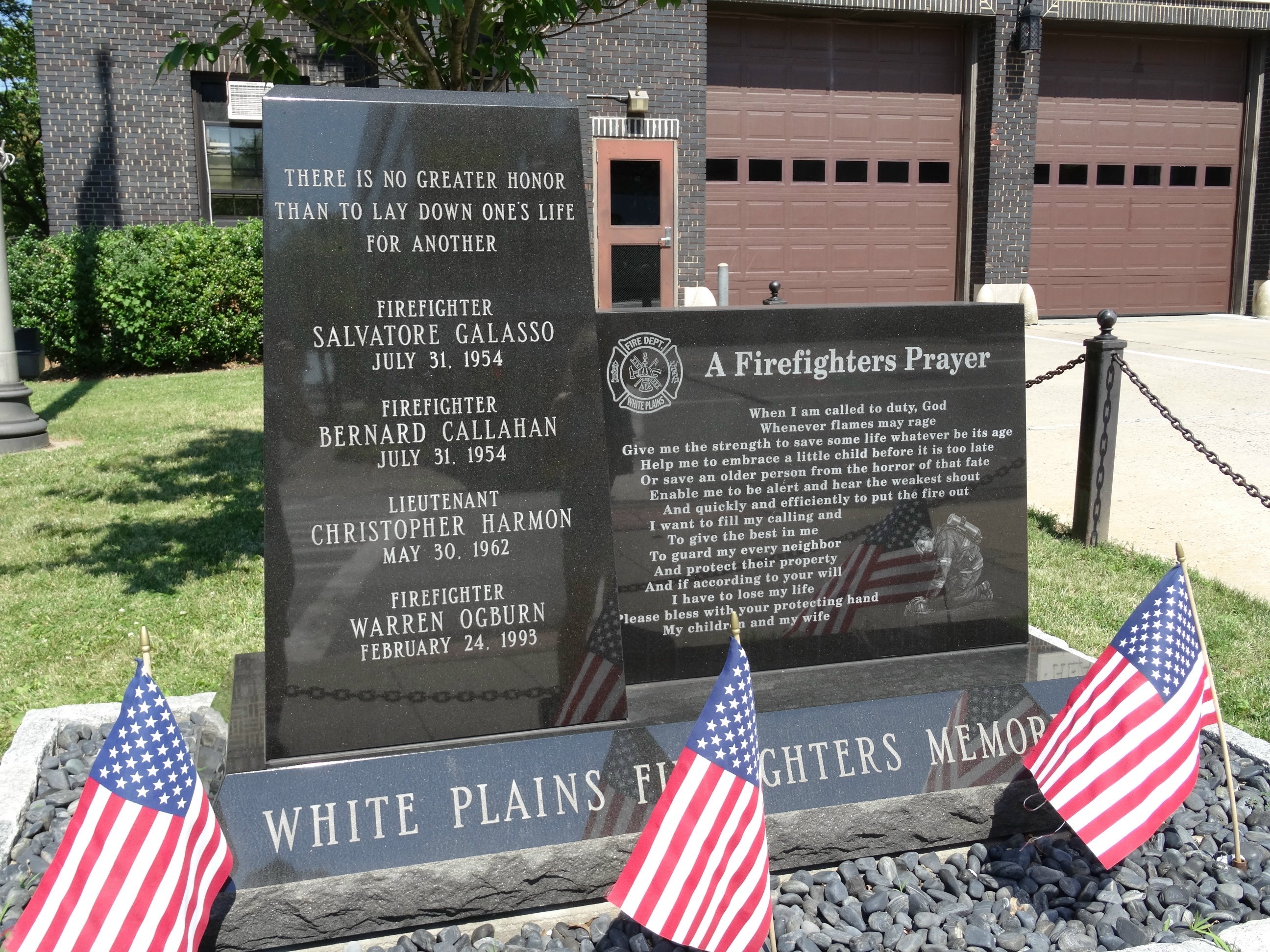 Located on the property of White Plains Fire Headquarters, the monument, made of black Zimbabwean granite, was erected and designed under the supervision of the White Plains firefighters, and currently honors four professional firefighters killed in the line of duty: Salvatore N. Galasso and Bernard J. Callahan who both perished on July 31, 1954; Lieutenant Christopher Harmon who perished on May 30, 1962; and Warren Ogburn, who perished on February 24, 1988. The monument also contains the well-known poem “A Firefighter’s Prayer,” written in 1947 by Smokey Linn. 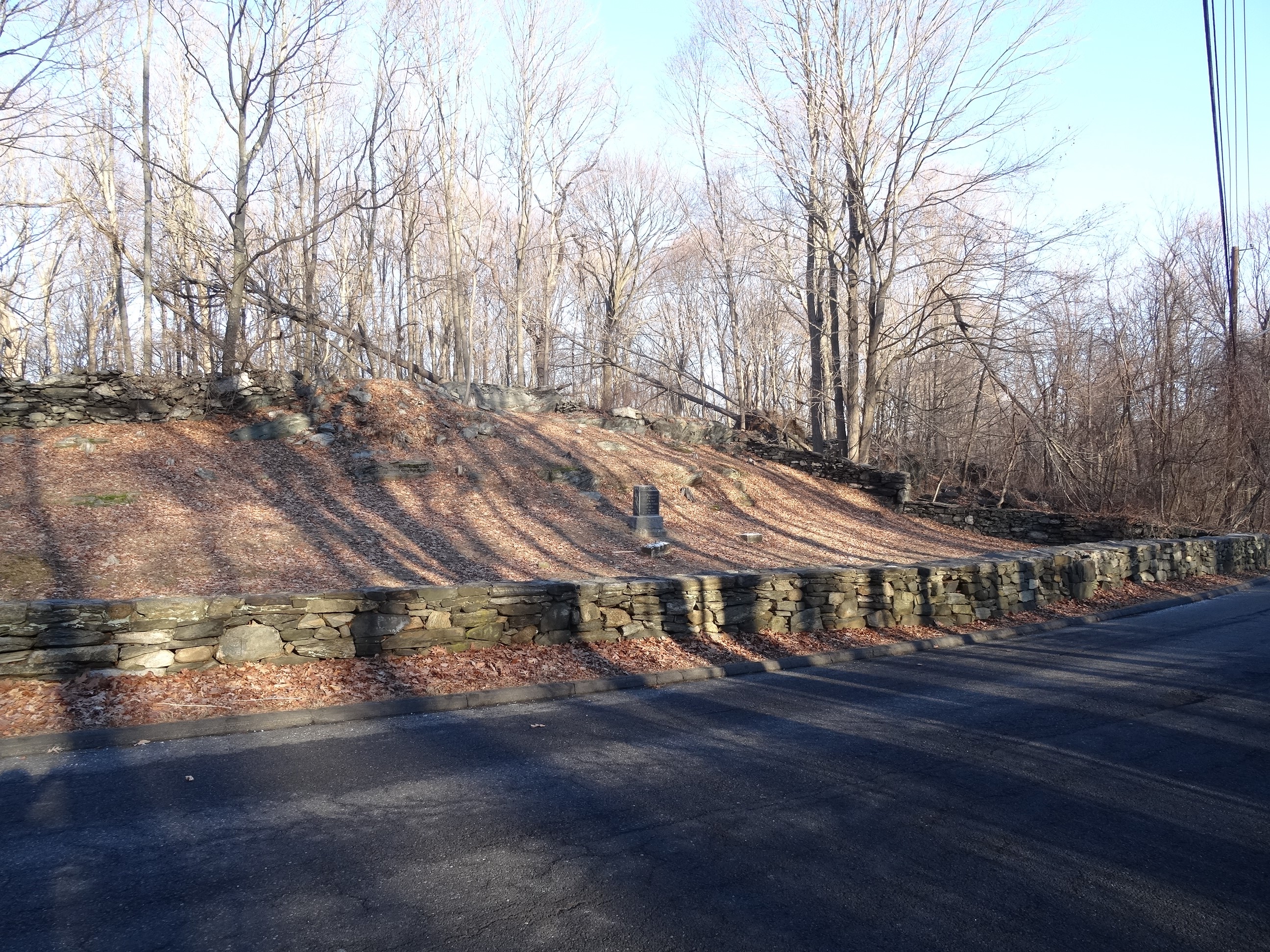 Family burial ground set aside in the 1820’s on Pine Tree Farm, the land of John Foster Sr.  (later inherited by David Baldwin, it was the last operating farm in the City of White Plains).  Approximately 54 burials took place on the site between 1820 and 1948.  Family names include Buckhout, Carpenter, Cox, Foster, Marsh, Meeks, Platt, Stevens and Wildey.  All but one of the headstone were stolen or destroyed by vandals in the 1980’s. The only remaining headstone is that of Charlotte Cowan (1851-1927) and John F. Buckhout (1847-1915). 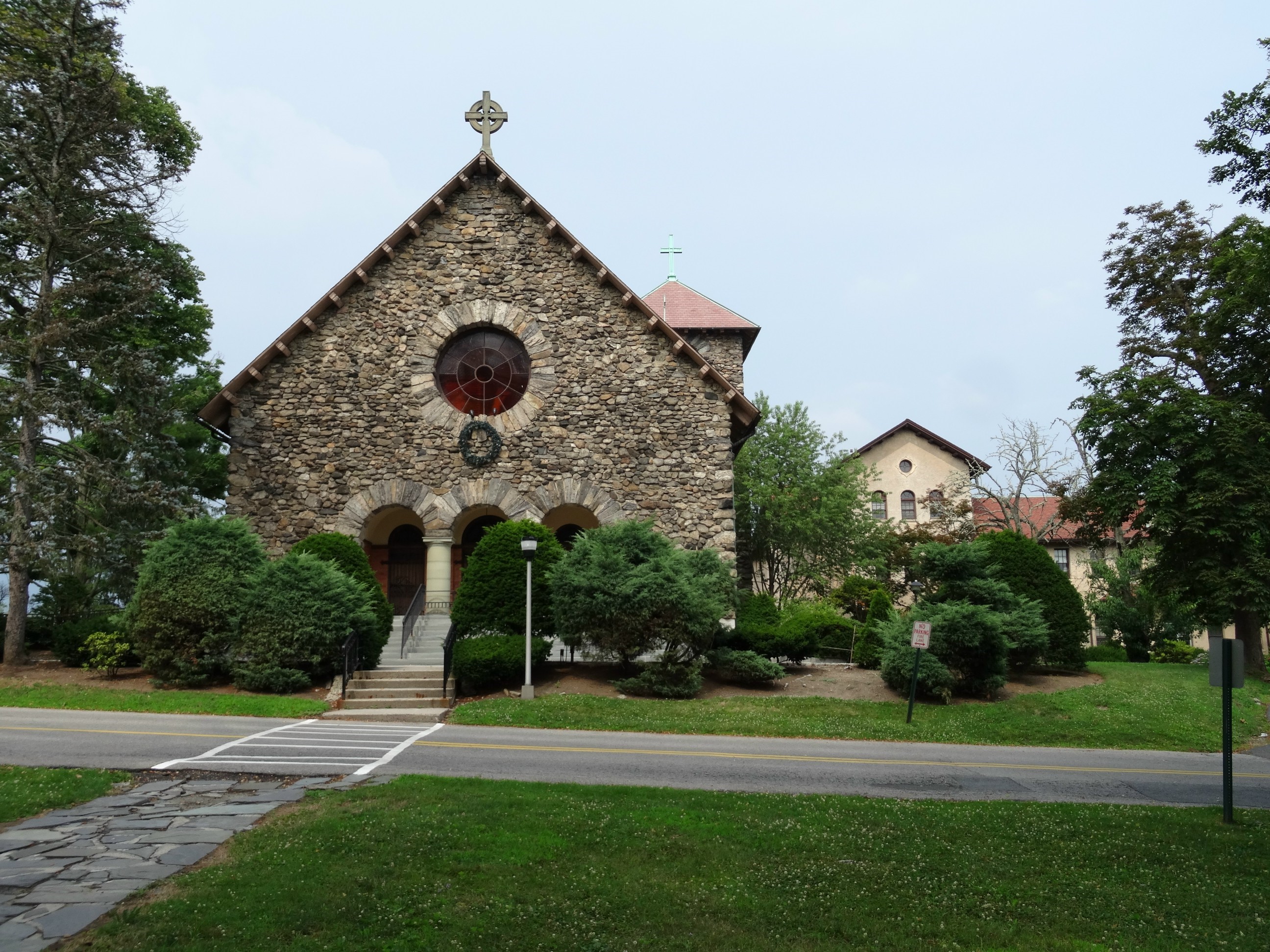 The Good Counsel Complex has architectural significance as a distinguished example of a late Nineteenth Century religious/educational campus. Begun in 1890 and largely completed by 1923, the property contains regionally significant examples of Romanesque Revival, Mediterranean Revival and High Victorian Gothic Styles. The complex was conceived of by Mother Mary Veronica Starr and Father Thomas Preston, co-founders of the order of the Sisters of Divine Compassion, who are buried on the site. Among the 10 contributing historically significant buildings are the Convent, the Chapel of the Divine Compassion, the 1867 Mapleton House, and the 1856 Tilford House. The site is privately owned. 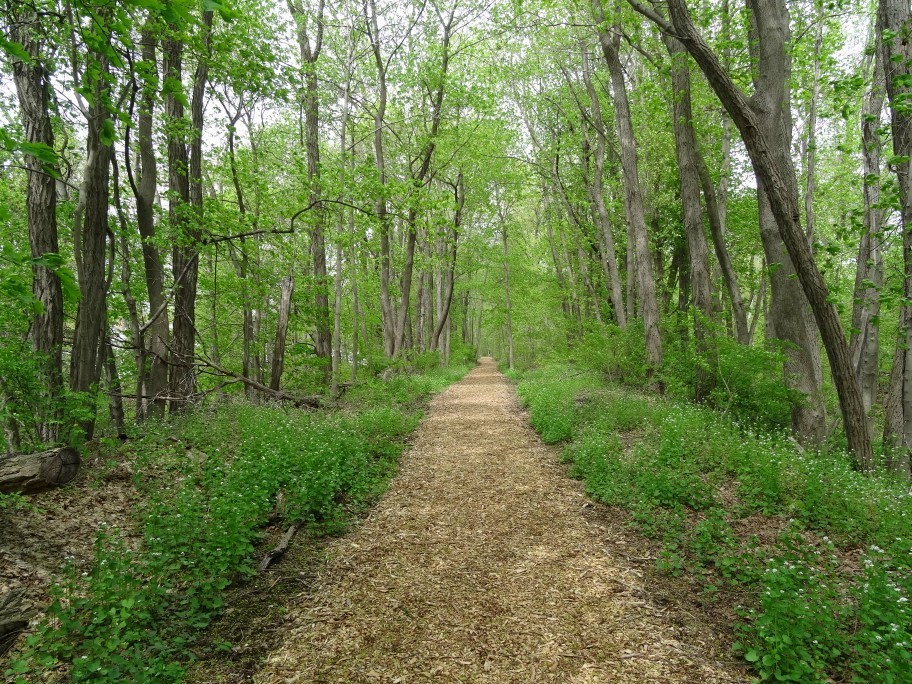 In 1906, a committee headed by J.P. Morgan and William Rockefeller (brother of John D, Rockefeller, Sr.) bought the controlling interest in the New York, Westchester & Boston Railway Co. and commenced the design of a modern, electrified commuter railroad from the White Plains terminal (now the Westchester Mall site) to Morrisania in the Bronx.  Construction commenced in 1909 and service began in 1912. The portion of the rail system within White Plains included four passenger stations and supporting infrastructure.  The railroad ceased operations in 1937 after a fraught financial history.  In 1996, the City dedicated 1.8 linear miles of the former right-of-way and adjacent lands as the White Plains Greenway.  The site was improved with a 1.4 mile walking trail from Gedney Way to the Scarsdale border.  Traces of the railroad remain including the buttresses and foundation of the Ridgeway bridge and station platform.  In 2012, the Greenway was renamed in honor of longtime White Plains preservation advocate Jack Harrington. 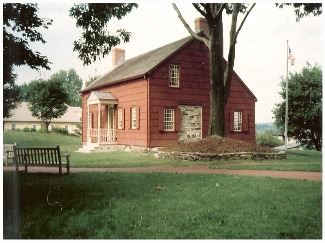 Circa 1720 farm house built by Samuel Horton and later   owned by the family of Jacob Purdy (1739-1822); an officer in the Westchester militia during the Revolutionary War.  The house served twice as the headquarters of General George Washington; first from October 23-28, 1776 during the Battle of White Plains, and again from July 21 – September 16, 1778.  The property stayed in the Purdy and Ferris families until becoming a multiple dwelling residence. In 1973, it was moved from its original location on Spring Street to its current site atop Purdy Hill. The building is under the management of the White Plains Historical Society open to the public by appointment (914) 328-1776. 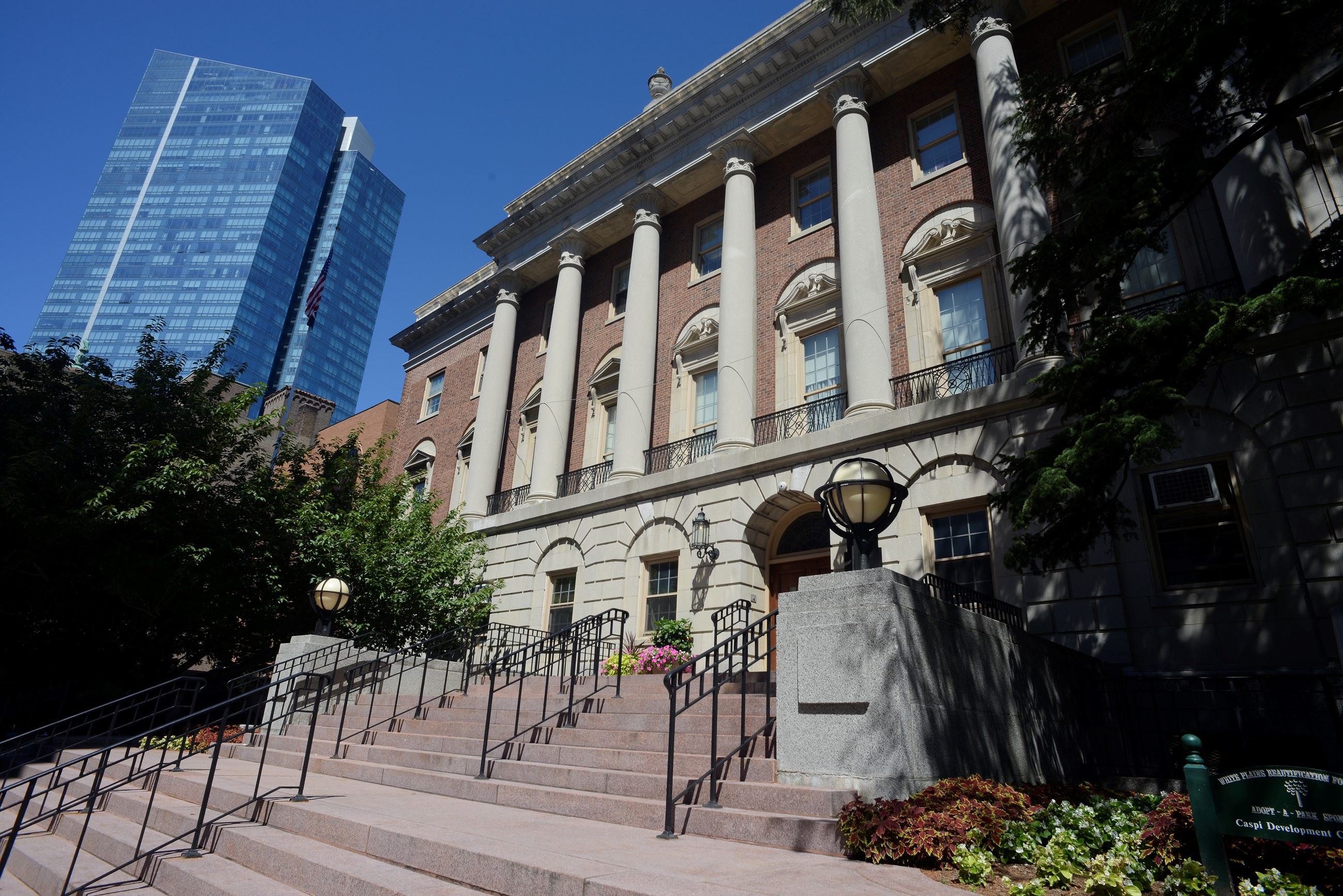 A “colonial revival” style local government office building designed by Joseph H. Freelander (president of the Fine Arts Federation of New York) and constructed by John O’Rourke and Son (est. 1830).  In 1919, a citizen committee in the newly incorporated City recommended that a City Hall be constructed to commemorate the servicemen of White Plains who recently died in the First World War (1917-1918).   In 1923, the Common Council of White Plains passed a referendum to allow $500,000 to construct the building, which was completed and dedicated in 1926.  Since then, the structure has served as the center of White Plains’ municipal government. While the building’s brick and sandstone façade is the subject of its landmark designation, the building also possesses an interior lobby (the “rotunda”) containing bronze memorials to those White Plains residents who fought and died in all our nation’s wars since the American Revolution; and the second floor lobby outside the Common Council chamber contains portraits on brass of all the White Plains men who died in the First World War.  In 1933, to celebrate the 250th anniversary of the purchase of White Plains from the Indians, White Plains held a parade with over 5,000 marchers and welcomed President Franklin D. Roosevelt at the steps of City Hall. 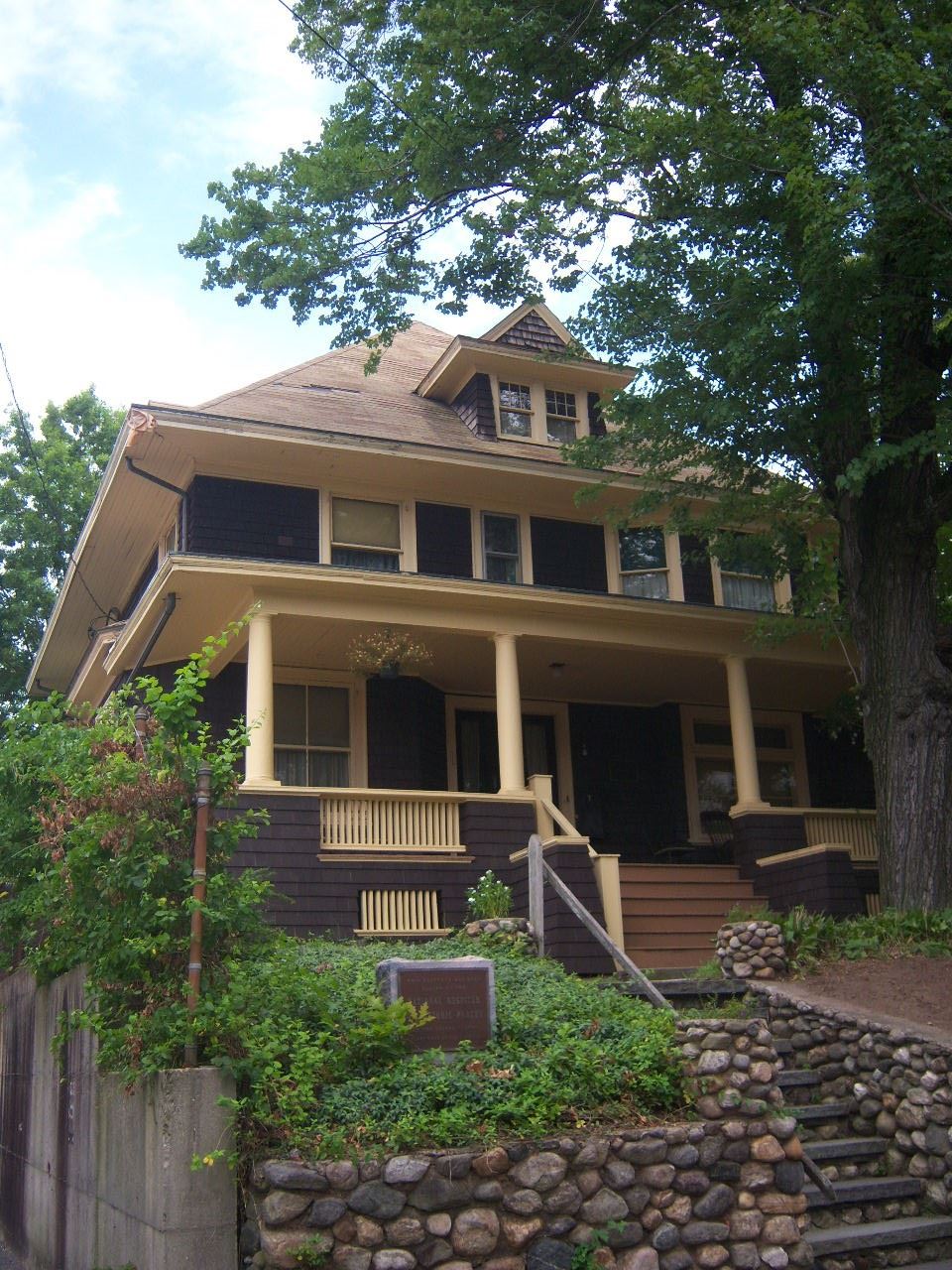 Shingle style residence built circa 1892 by David Cromwell, a local banker who was involved in many White Plains civic institutions.  His son, John Chester, was a volunteer firefighter who was killed in the Mead  Building fire on February 3, 1907.  The building was     purchased as a private home, studio and archive in 1921 by Australian-born musician/composer Percy Grainger (1882-1961) (Children’s March “Over the Hills and Far Away,” Country Gardens, Londonderry Air, Mock Morris).  The house was also occupied by Grainger’s mother, Rosa, and his wife, artist Ella Strom Grainger.  The property is managed by the International Percy Grainger Society and open to the public by appointment (914) 281-1610. 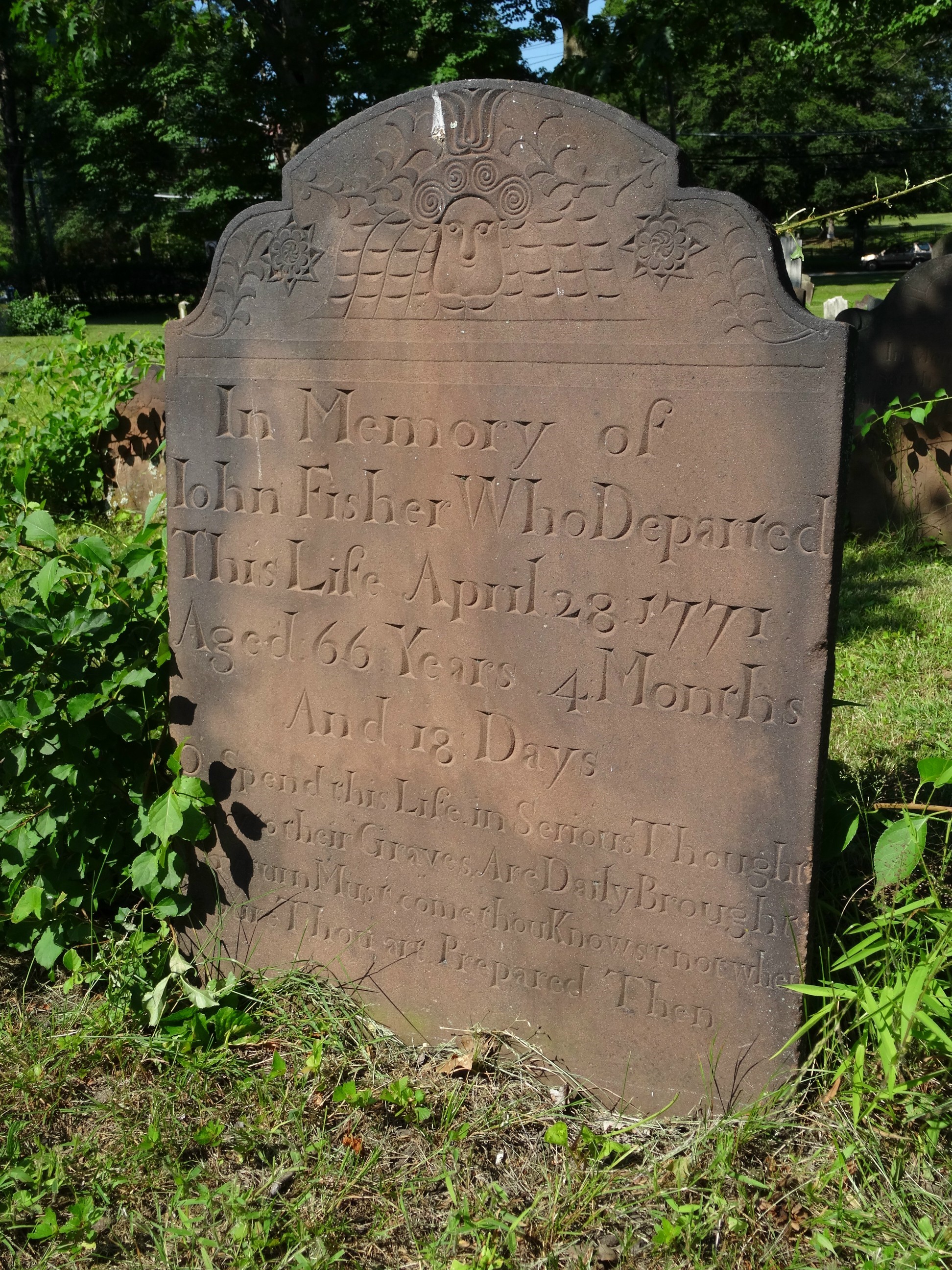 The “Presbyterian Burying Ground” is the oldest cemetery in White Plains with its first recorded burial dating to 1709, before the establishment of the Town of White Plains. Owned by and adjacent to the White Plains Presbyterian Church, its current footprint contains tombstones from the 18th and 19th century, including sandstone markers with decorative effigies and elaborate symbols carved by America’s earliest sculptors.  The congregants buried here are among White Plains’s earlies families, and include the last names Purdy, Ferris, Ward, Hart, Buckout, Tompkins, Hatfield, Odell, Fisher, Dusenberry, Martine, Miller, Underhill, Barker, Mitchell, Secor, and Haviland. Among the deceased are also 42 men who served in the American Revolution, including Jacob Purdy and Elijah Miller. 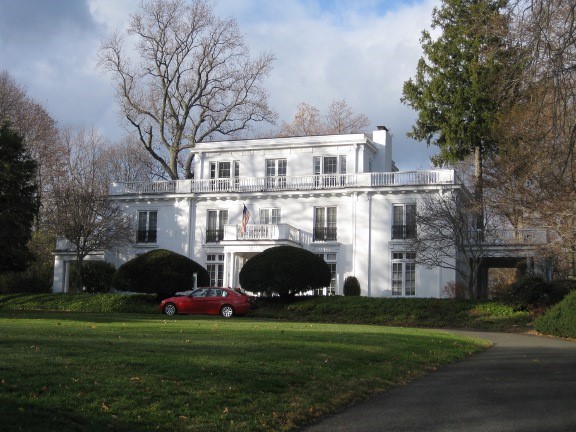 c. 1920 neoclassical mansion deigned by Chester A. Patterson as a private country residence for tobacco heir Robert L. Dula and his then wife Elsie.  The third floor contains a 33’ x 18’ penthouse ballroom with views of Long Island Sound through three sets of French doors. The building is a private residence.